Carry Me Home to Mother - A Griffin GA Ghost Story

Carry Me Home to Mother. This is the tale of a father’s love for his son and of the ties that bind a family together. The America Civil War took the lives of many men, young and old, from the North and the South. When 18-year-old Private Jackson was killed in the Battle of Resaca in May of 1864, he was hastily buried on the battlefield. His spirit couldn’t rest until his remains were brought home to his mother in Griffin GA. Likewise, his father wouldn’t rest until he brought his son home. His father had made an attempt to locate his son’s grave but to no avail. Afterward, the soldier’s ghost appeared to his father and told him exactly where to find his resting place. Mr. Jackson made another trip to the battlefield, followed the spirit’s instructions, found his son’s resting place and carried the young private home to mother.

Interesting Facts About Our Ghost Story 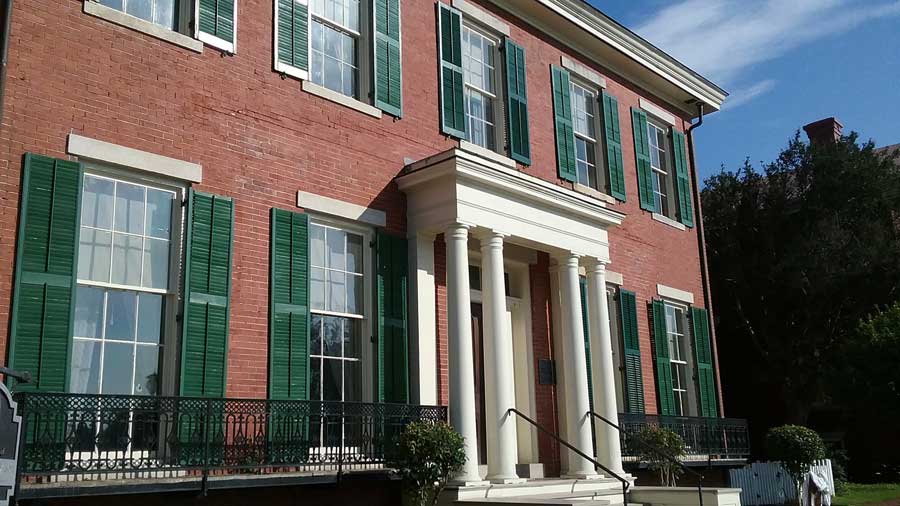 Special thanks go out to The Boyhood Home of President Woodrow Wilson in Augusta GA for allowing us to film the reenactment scenes for this episode. This is the Civil War home where Wilson lived the longest throughout his lifetime. There are fourteen rooms furnished to the 1860s Victorian period and contains the original service building with kitchen. They are open for tours. Find out information about the home and the tours on their website.
Read the Transcript of This Stories, Secrets & Sagas Episode Expand

During the Civil War many a young man lost his life while defending the cause. It was a bloody conflict. In all, over 600,000 died because of this war. Many died alone on the battlefield, listening to the murmurs and cries of desperation, many times even crying for their mothers as death set in.

This is the story of an 18-year-old young man who was one of those casualties. He was the son of Mr. and Mrs. Jethro Jackson of Griffin, Georgia, fighting for the Confederacy under General Joseph E. Johnston and the Army of Tennessee. This was the beginning of General William T. Sherman’s Atlanta campaign, and it was fought near the small town of Resaca, Georgia.

In May of 1864, the Confederate government granted General Johnston’s request for reinforcements to his camps around Dalton, Georgia. Johnston knew Sherman’s army was coming and to defend Atlanta at it’s northern border more troops would be needed. And by this period in the war, the end was near for the Confederacy. The troops were weary and the cause had become an invitation to suffering and death. There was no victory plan at this point, only a last ditch effort to protect the cities, which stood in between Sherman and victory.

By May 7th, 1864, Sherman’s masses of troops started to make their way towards the south and their prize…Atlanta. In between them stood a proud but demoralized Confederate army and our young Private Jackson. It was a fierce battle, but by May 16th it was over and the Union troops headed south, pursuing the retreating Confederates to Adairsville, Georgia. When the battle was over, there were some 6,100 casualties, 3,500 for the Union and 2,600 for the Confederacy. And one of those who died for the Confederacy was Private Jackson.

It is said that Private Jackson was buried by his retreating comrades in an old pine box, constructed of rough planks torn from a nearby bridge. When the war ended Private Jackson’s father, Jethro, and some of the surviving Confederate soldiers headed to Resaca to find the grave and bring the young private home to Griffin. Sadly, Jethro had no luck in finding his son’s grave. Broken-hearted, he returned home without his son’s remains.

A few nights afterward, he dreamed that his son came back to him and, standing by the bedside, said, "Father, I am buried under a mound which was thrown up by the Yankees after I was killed. You will know the mound when you see it by the pokeberry bushes growing upon it. Go and take me up and carry me home to Mother."

The next day, Mr. Jackson went back to the Resaca Battlefield with one of the young men who had buried his son. Within a short time they found a mound with a pokeberry bush growing on top of it.

Could this be real? Mr. Jackson’s heart must have started beating wildly at this point. The two men began hurriedly digging in the red clay. And just a few inches below the surface was a pine box, crudely made with pine timbers, inside were the remains of a dead soldier.

The body was so badly decomposed it was completely impossible to recognize any features of his son. With all the dead soldiers who were buried on the battlefield, couldn’t this just be coincidence?

And then Mr. Jackson’s tear-filled eyes looked down at the shriveled remains of the young man and noticed his shoes. Other than the wear from battle, they were identical to the pair Mr. Jackson had given to his son the last time he saw him alive. Private Jackson’s wish was granted and the remains of the young soldier were placed in a fine casket and "carried home to Mother."

We’ll see you next time on Stories, Secrets and Sagas!

Check out our episode on The Little Boy in Graniteville Cemetery!