Native Americans called Nancy Hart, Wahatchie. This meant War Woman. Her deeds during the American Revolutionary War not only earned this fierce name, but she is also the only woman in the state of Georgia for which a county is named. Just how did a woman in rural northeast Georgia earn these accolades? Come with us as we tell you the story of the War Woman, Nancy Hart. 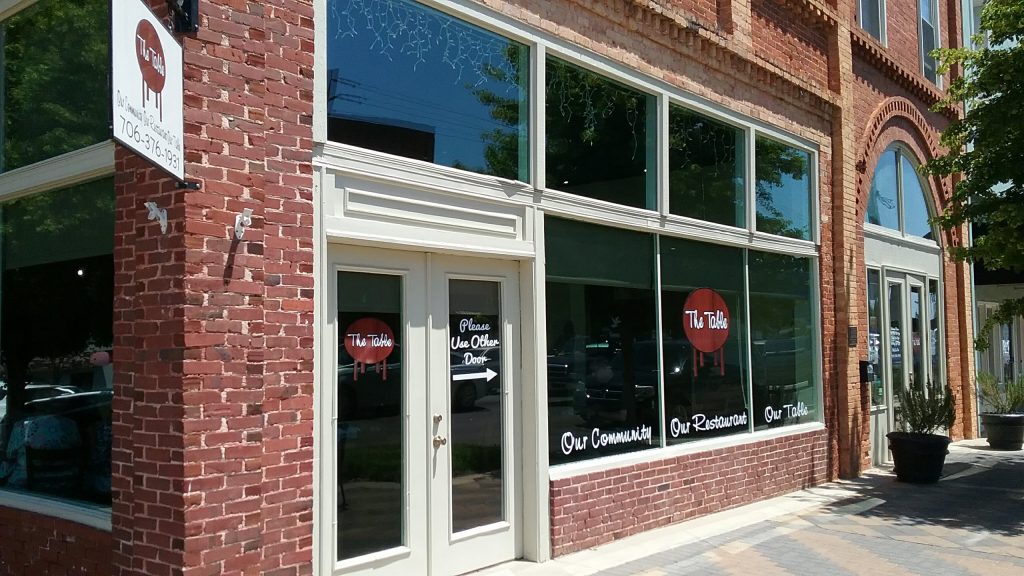 When telling the story about this interesting woman, we had to drive up to Hartwell GA. The downtown was vibrant and was filled with shoppers and interesting shops and restaurants. We were especially enticed by the smells wafting our way from The Table, so we couldn't resist dining in for lunch. We were not disappointed! Mark had their chicken salad sandwich and pasta salad, and Jamie had their burger with homemade macaroni and cheese. Everything was mouthwateringly delicious! Visit their website to see their offerings and then dine in. Tell them Stories, Secrets and Sagas sent you!

We’ve all heard of Francis Marion, the famous swamp fox from South Carolina. But, did you know there was a heroine patriot from Georgia who spied on, killed and captured British soldiers during the Revolutionary War? Her name was Nancy Morgan Hart. Come with us as we investigate her legend.

Nancy was born around 1735. Early in her life, Hart and her family left North Carolina and made their way to Georgia, settling in the extremely fertile Broad River Valley. Growing up in the backcountry of Georgia, she learned to live off the land and how to shoot a gun with expert skill, hunting for the family of six children and her husband. Nancy also was very familiar with herbs and their usage in treating many diseases and ailments of the time.

She was a tall and gangly woman, with red hair and a smallpox-scarred face. But what she lacked in beauty she more than made up for in spirit and feistiness. It was said her temper was not to be trifled with, and she had a very short fuse, seeking vengeance and retribution on those who crossed her or her loved ones.

As legend has it, Nancy was called Wahatche (Wa-Hatchie) by the Native Americans, which meant War Woman. It’s even said that she dressed as a simple-minded man, wandering into Tory camps and British garrisons gathering information. But the event for which she would become legend happened at the Hart cabin, here, just outside of Elberton, Georgia:

So, life got very interesting one day during the Revolutionary War. Again, as legend goes, a group of Tory soldiers came upon the Hart cabin and demanded that Nancy feed them. While waiting, the soldiers also drank some of their whiskey or rum. Soon, the soldier’s senses were dulled, and Nancy took the opportunity to hide their guns while they were preoccupied with their arrogance and drunkenness. Saving some weapons for herself, she ordered them to surrender. One Tory ignored her and was shot and killed. Another made a run for the door, and she killed him too. When her husband and neighbors arrived they suggested that the prisoners needed to be shot. Nancy disagreed. She thought hanging would be more fitting, so they strung them up from a nearby tree.

After the war Nancy found religion, seeking guidance and relief from the Lord and becoming a very vocal Christian. She died in 1830 in Henderson County, Kentucky and is buried at the Hart family cemetery.

Later, during the Civil War, a group of women in LaGrange, Georgia founded a militia company named the Nancy Harts to protect the town from the Union army. They must have been a fearsome group who remembered Nancy’s legendary status.

But today, many people know very little about this heroine or for whom Hart County, Lake Hartwell and the Nancy Hart Highway are named.

Check out our episode on Lulu Hurst, the Electric Girl!