Scarboro GA is a desolate place teeming with the energy of yesteryear. As you walk through the small, abandoned settlement, you can almost imagine people shopping at the store, swimming in the Ogeechee River and getting water from the natural spring that runs nearby. Standing still, you can hear the silent echo of long-gone trains chugging through the town on the Central Rail Road haunting the wind. The Scarboro Memorial Cemetery is pristine, while just past its border, another long-forgotten cemetery is overgrown by nature. Travel with us to this quaint ghost town on this episode of Stories, Secrets and Sagas. 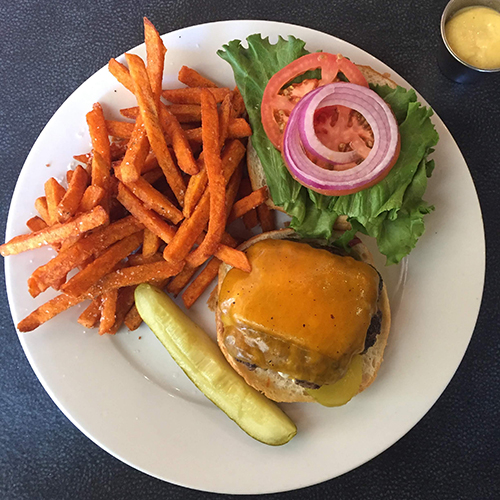 Where to Eat Traveling to Scarboro GA

On our way to Scarboro, we stopped in nearby Waynesboro GA for lunch and found Good Day Café. They were hopping, but we didn’t wait long for a table or for the excellent service to begin. They had a variety of items from which to choose on their menu, but I narrowed it down to the burger, while Mark opted for the chicken wrap. We were both pleased with the presentation of the food and by the mouthwatering flavor. Between the friendly staff never letting our glasses go empty and the delicious food, we’ll definitely go back the next time we’re passing through Waynesboro. Give them a try and tell them Stories, Secrets and Sagas sent you!

Have you ever wondered what was here before you came? I mean, our world is constantly in flux, ever changing. What is here today may be gone tomorrow.

For example, in 1915, this parking lot behind me was home to the Tubman School for Girls. It burned in 1916, and now there is no trace of it ever being here.

Have you ever wondered how many feet walked on the ground you now stand?

And how many places that once existed that are now no more?

In this episode of Stories, Secrets and Sagas, we’ll travel to the town of Scarboro, Georgia, and, while we are there, we’ll learn a little about a place that is gone but not forgotten.

Just a short drive from Augusta, Georgia on the Ogeechee River lays the remains of Scarboro, Georgia. Originally created with a train-refueling depot for the Central Railroad, today there is little evidence of the once-thriving farm community. Over the years the town went through feast and famine, but the town was in a great location with the river and railroad nearby. On December 3, 1864, General William T. Sherman and Union troops camped along the railroad tracks here as they made their famous March to the Sea. Legend has it that Sherman burned and looted much of the town, sparing only a few buildings. He also ripped up the railroad and devastated anything that could bring income or comfort to the people here.

Despite the hardship of the Civil War, the town thrived in its aftermath. On Sundays, the faithful at the Baptist Church could be heard singing, and on any given summer day, children and adults swam in the nearby Ogeechee River; placing a watermelon in a cold spot near the shore and enjoying the sweet, cool treat while thawing in the sun afterwards.

In the not-too-distant past, Mr. Frawley’s store carried almost anything you could need – from candy to coffins all under one roof. Like many small towns of the past, the general store was a gathering place for children and adults alike. It was a place where you heard the news while being warmed by an old cast iron stove or where you just played with Mr. Frawley’s old dog, Buster.

If you walk down to the Ogeechee you will see a nicely manicured graveyard marking in perpetuity many of those who were connected to this town. And closer to the river lie many graves from further back in time, of forgotten souls and a once thriving community now slowly being overtaken by nature.

Today, other than a logging truck cruising down Highway 17 or a cargo train making its way down the railway, the town is pretty quiet. Just think of the stories, secrets and sagas this old town could tell! We’ll see you next time.

Check out our episode on Blue Sky's Tunnelvision and Neverbust Chain!